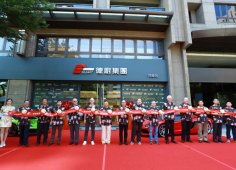 Reopening of our partner’s showroom in Taiwan

In Taiwan “Made in Germany” seems to be particularly popular. In the middle of June Silkart opened its fourth branch on the island in Kaohsiung. There were also guests from Germany. Franz-Josef Schulte from Schulte Design and Leo Lübke from Cor congratulated their longtime customer Jimmy Tsai personally on the opening of the new business premises. In an exposed location, the company offers its customers mainly brands from Germany.

“I gladly followed the invitation to the opening in Taiwan,” says Franz-Josef Schulte, who has been supplying Silkart with solid wood furniture for ten years from Krefeld. “The innovative power from Germany is highly appreciated here. And in terms of trends, Jimmy Tsai has long trusted the flair of his German suppliers. However, the grand opening was quite traditional: with a red carpet, festive lucky kites and local delicacies, the owner Jimmy Tsai received his numerous guests, including the head of Germany, Bas Mol von Poggenpohl.

Silkart has started as a pure kitchen specialist and is now regarded as a successful supplier in the upscale residential segment on the island in the West Pacific. At the same time, the makers mainly concentrated on exclusive brands such as Poggenpohl, Rational, Interlübke, KFF, Fischbacher and Schulte Design and Cor. (Furniture culture)